One of the top mods on our 5 best mods for the 2.7 EcoBoost is upgraded downpipes. While the first and second gen 2.7 EcoBoost’s came in with 315hp and 335hp, you might be left wishing you picked the F150 with the 3.5 EcoBoost. Or maybe you’re just looking for a little more oomph.

Upgraded downpipes are one of the best performance mods for the 2.7L F150. Downpipes are part of the exhaust system, and they are the most restrictive part of the whole system. Upgrading the downpipe will reduce backpressure and free up horsepower, leading to 10-20whp gains.

We’re going to focus on the performance benefits of upgraded downpipes, catless vs high-flow catted options, and some of our favorite F150 downpipe brands. Fitment of the brands we mention will be tailored to the F150, however, this guide is also relevant for the Ford Bronco and other cars with the 2.7 EcoBoost.

Backpressure affects a turbine wheels ability to spool. The ideal exhaust system creates a lot of pre-turbo pressure and has zero post-turbo pressure. While this isn’t possible without completely removing your exhaust system, upgrading the downpipe can help remove a ton of the backpressure. Therefore, upgrading the 2.7 EcoBoost downpipe results in more efficient turbos, which results in more power generation.

Not only does this create more power, but it also reduces stress and therefore improves the reliability of the 2.7’s twin turbos.

Overall, the less post-turbo pressure you have, the more power gains you will see. This is important as you choose between catless or high-flow catted downpipes which we will get to below.

Similar to the 3.5 EcoBoost, the 2.7L Nano received a 2018 upgrade. This upgrade included the addition of port injection alongside the existing direct injection. Additionally, it received a new EGR system, a lighter weight cam, lighter turbine wheels, and an electronically actuated wastegate for the turbochargers.

Overall, the 2nd gen 2.7’s are capable of producing more power overall due to the fueling upgrades. With respect to downpipe power gains, the 2nd gen engines will also produce slightly more horsepower and torque gains due to the turbocharger upgrades. The lighter turbine wheels allow the turbos to spool more quickly and operate more efficiently. Because the turbine wheels are lighter, the benefits of reduced backpressure are greater.

While the power gain differences are minimal we wanted to point out that the 2018+ F150’s are slightly more power capable than the 2015-2017 models. Additionally, to achieve the upper range (+20whp) of power gains, you will also need to combo the downpipes with an intake and tune.

The two options for performance downpipes are catless or high-flow catted downpipes. Catless as the name suggests completely removes the catalytic converters. While this is technically illegal from an emissions perspective, completely removing the cats results in the least amount of post-turbo backpressure. High-flow catted options keep the catalytic converters but use less restrictive cats to improve flow and reduce backpressure.

Because catless downpipes remove all of the restriction of the cats they provide the biggest power gains. High-flow downpipes will generally produce about 5-8whp less since they still have some restriction. However, the tradeoff is keeping your car legal and being able to pass emissions testing.

The only other downside to high-flow downpipes is that they are more expensive. Because catalytic converters use rare earth metals, they are a bit more expensive than catless downpipes which are just hollow steel pipes.

Finding catless downpipes is becoming rather difficult due to increased emissions scrutiny. While most high-flow catted downpipes are legal throughout the US, make sure you check whether they are legal within your state. Emissions regulations vary from state to state and some high-flow cats are still illegal in states like California. 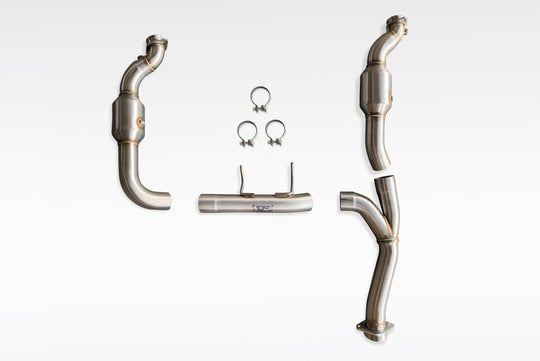 CVF offers excellent, high-quality catted downpipes for the Ford 2.7L EcoBoost engine. This product is made from T304 stainless steel with a 3″ diameter and 400 cell cats. The CVF F-150 downpipes are mandrel bent, TIG welded, and come with a CVF lifetime warranty. Point is – product quality is certainly there.

Top that off with a great price of $750 and it’s tough to go wrong with the CVF 2.7 EcoBoost downpipes. It’s a little pricier than catless downpipes, but an extremely good price for catted pipes. Overall, we really like CVF products and their F-150 downpipes are no exception.

Additionally, we developed a relationship with CVF and were able to get a 5% coupon code for our readers. Use the code ‘TUNINGPRO’ at checkout for 5% off your order with CVF. If you’re set on high-flow downpipes for your F-150 2.7L engine then look no further. 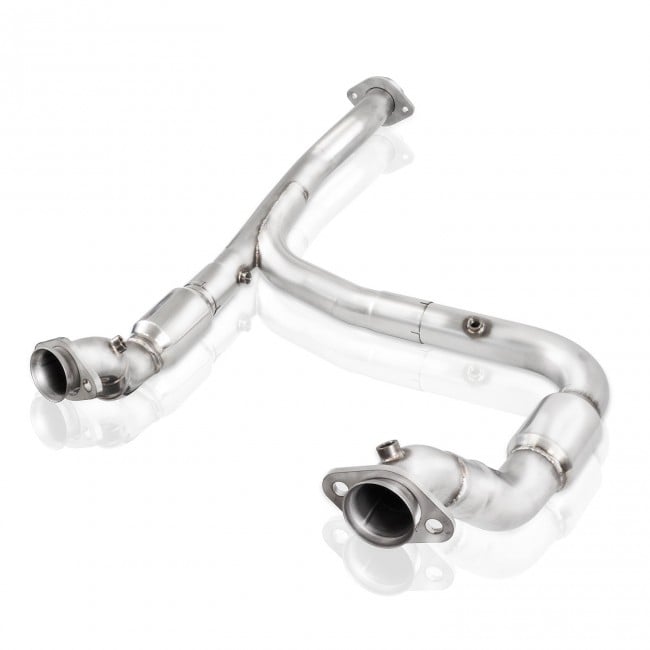 Both aFe and Stainless Works make sets of stainless steel downpipes for the 2.7 EcoBoost. These will generally last longer and won’t rust out as quickly as an aluminum set of downpipes. Both of these downpipes are very similar in design, performance, and price. Both use EPA legal catalytic converters and 3″ piping, similar to the SPD product. aFe specifies that their downpipes require custom tuning.

aFe Power has a set of catless downpipes for the 2.7 EcoBoost. However, finding them for sale online from a reputable website is very difficult. Your best bet for catless options is to find a used set on the forums.

Additionally, one other downside to catless options is that finding a shop to install them is going to be rather difficult as well. Most shops have stopped installing illegal exhaust components as they have been getting fined if they get caught. So you will need to either DIY these or pay someone under the table to get them installed.

Overall, upgrading your F150 downpipes is one of the best modifications you can make to your 2.7 EcoBoost. With a tune and an intake you can expect to get around 15whp and 15wtq gains with high-flow catted downpipes, and up to 20whp and 20wtq with catless downpipes.

High-flow options are strongly recommended as they still produce solid power gains and eliminate the emissions headache. From a sound perspective, neither catless nor high-flow options will provide a super loud exhaust note. You will notice a slightly deeper exhaust note and some more noise under acceleration and at idle, but overall it is not an extremely noticeable sound improvement.

While they can get rather pricey, adding 15whp for ~$800 is pretty inexpensive on a $/hp basis. This makes downpipes a fantastic performance mod for those looking for a bit more power and a small amount of exhaust noise improvement.